How did it start?
Quite out of the blue (in 2008), I got a mail from a senior Editor from Puffin (Penguin's children's list) - who seemed to like some of the posts I had written on children's literature in Bengali. She asked me to do a Classics Plus section for some of the reprints of children's classics they were doing. Basically, a trivia-cum-fun stuff to build on the text that would egg the young reader to read and think more.
Since the first two books were collections of Ray's short stories and Shonku novellas, I took all of 3 minutes to say yes. And was quite pleasantly surprised to find that they would pay me as well.
This became a nice routine and I ended up doing the Classics Plus for 6 books - Ray's Short Stories, Professor Shonku, Swami & Friends, Jungle Book, Tagore's Short Stories and Lila Mazumdar's novellas - all of which were favourites from my childhood.

You were talking about a cricket book, right?
Oh yes. Right.
Sometime in March 2010, my editor asked me if I would write a book on cricket for children. It took me a couple of hours to stop laughing and ask her if she was serious (which she was). She felt that kids did not like too serious a view on anything and wanted a 'non-purist's' view of the game. Non-purist, I was and said yes in a jiffy.
When I questioned her closely later, I realised that the book was meant to be a 'companion' for the cricket World Cup and I remember thinking that she was really brave to commission a book for a tournament where India was going to get chucked out rapidly!

So, you wrote it?
Well - as you can see - yes.
With a lot of help from Cricinfo, my leaky memory, readers of this blog and friends. I thanked all of them in the Acknowledgments.
Scribbling notes on back of envelopes, leafing through newspaper cuttings from '96, searching web archives - I managed to thulp 40,000 words - much of which was written on a Goa holiday - for the first draft. It turned out to be about 50% more than the planned page count.
After some brutal editing, re-writing and suggestions of reducing font size - we had it all fitted in 144 pages.
And that included some very cool and quirky illustrations by Dipankar Bhattacharya.
And then?
The book got published.
It was a pity that my father - who was the first to be informed of the contract - was not around to see the printed book. He passed away in July 2010.
Immediately afterwards, there was much excitement in the family about seeing my name in print. I don't think any of my uncles, aunts and cousins got around to reading the book. They were ecstatic with only the cover page.
I forced myself to read it cover to cover and was horrified to discover 3 obvious and 2 subjective errors in the final printed version. Though I am now quite relieved that not too many people spotted them

So, how did the book do?
Okay, I would say.
A 'seasonal' book - on a quadrennial event - is not supposed to have a very long shelf life though Dhoni's six would have added some wind to the tail.
Ahem - most of the reviews were very good, though. 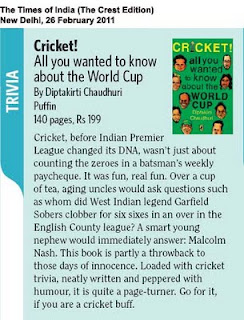 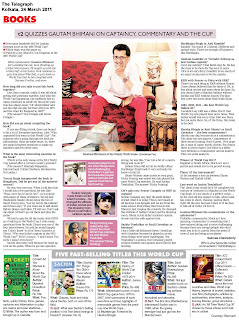 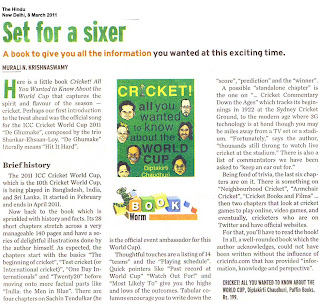 So, now what?
Well, the book is still available on online bookstores (like Flipkart, Indiaplaza, Infibeam and Coinjoos). The good folks at Dial-a-book may also have a copy or two. If you still need a fix of World Cup, you might want to place an order (or two).