Live - From the Calcutta Book Fair

on February 24, 2007
So, I managed to resurrect my attendance at the Calcutta Book Fair after a three-year hiatus. And quite appropriately, this year was the first time the Fair was being held in a different venue. From the centrally located Maidan, it has moved to a smaller, more intimate location at the Salt Lake Stadium.
Hopefully, this streak of attendance will last as long as the previous one.

One of the attractions of this year's Fair was the ABP stall.
The ABP campaign runs on the punchline - Anandabazar ki Bollo? (What did Anandabazar say?) - and it is a tongue-in-cheek rendition of the topical events of the day. I had written about it earlier as well - but this campaign seems to have grown in popularity enough to be quite a discussion point in the city.
In fact, from the tone of the campaign, it is becoming something like the Amul campaign (without the visuals). Witty, topical and very visible. People in Calcutta actually wait for the next one.
The ABP stall had a collection of all the punchlines from the last few years. I managed to memorise most of them.
For non-speakers of the language, this remains inaccessible. But then, you have not been able to watch a Ray film in its complete splendour, you have not read Tagore in the original. This is just a funny ad campaign you are missing out on!

And I ended the 32nd Book Fair with the following picture. 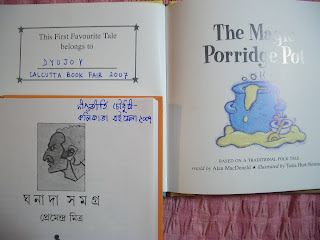 I don't know who handles their campaigns, but they're inimitable and brilliantly tongue-in-cheek.

You realise I'm basically repeating what you said, but that's 'cause I'm such a big fan :D Eirokom mostly-Bengali-sometimes-bilingual punning keeps me, as you said, waiting for the next.

Btw, did you follow the Anadabazar Patrika and Desh campaigns of increasing circulation and revamped look, respectively?

the mad momma said…
Hey you.. want your thoughts on this....

Anonymous said…
There are a couple of other knockouts as well.
Sample this: 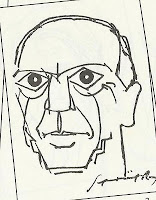 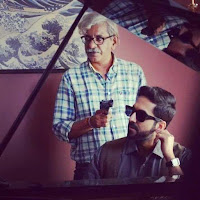