on August 07, 2011
I recently made the silly mistake of commenting on a Facebook post by The Mad Momma. Like her blog posts, her Facebook status updates also garner 857 comments (on an average). For three sleepless nights, my Blackberry beeped incessantly with notifications of “XYZ also commented on The Mad Momma’s status”. Though scarred for life, I have now regained some semblance of composure and can type out sentences without those red notification asterisks blinking in front of my eyes.


So, I thought I will do a post on the topic of the aforementioned status – “Perfect jawline, stunning good looks + deeply evil aura. Mohnish Behl, you're the only villain I'd happily follow down the primrose path to the everlasting bonfire.” And also the man who propounded the First Theorem of Bollywood Friendship ("Ladka ladki kabhi...")

Son of Nutan, nephew of Tanuja and cousin of Kajol, Mohnish Behl is the only male member of his family to have entered Bollywood. His ambitions – as is normal – were centered on becoming a hero.
I remembered that in his first film, he was paired opposite Ayesha (who later married Jackie Shroff and produced Boom). IMDb now helpfully informs that the name of the film was Teri Baahon Mein and Mohnish played ‘Jungle Boy’ in the film. A poster I have dug out seems to suggest a Tarzan-type plot and treatment! 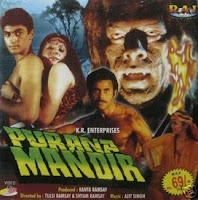 Immediately afterwards, he played the lead in the Sholay of horror cinema – Purana Mandir. Produced by the Ramsay Brothers, Purana Mandir was made famous by the pretatma (or equivalent) called Saamri and Mohnish was reduced to saving his scantily-clad fiancée from his evil curses, bulbous noses and glowering eyes.
As the poster design indicates, creative satisfaction couldn't have been very high on his agenda while choosing this film. A DVD which eventually sells for Rs 69 indicates massive popularity at the lower end of the scale though! 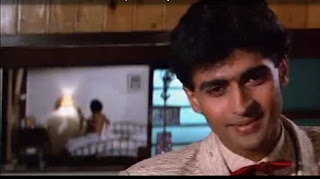 Towards the end of 1980s, Maine Pyar Kiya released and Mohnish found fame (and fortune) as Jeevan who had the most crackling dialogue in the film – “Ladka ladki kabhi dost nahin hote. Yeh to ek parda hain kapkapati raaton mein dhadakti hui dil ki bhadakti hui aag ko bujhane ka…”
He was good-looking (some say even better than Salman), suave and decidedly evil. He tried to shoot helpless pigeons. He tried to rape Bhagyashree (even though she was wearing a dress that didn’t ask for it). He did everything else that a good bad Bollywood villain should do.And made the ‘Young Villain’ role his own. 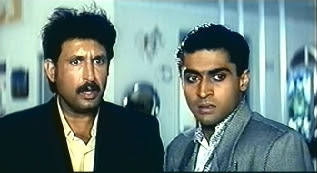 In the 1970s, Ranjeet was the archetypal Young Villain - son of main villain (usually Jeevan) or the foreign-returned debauch or the college bully who molests the hero’s sister. In the 1990s, it was Mohnish Behl.

In Pyaar ka Saaya (a remake of Ghost), he was the evil cousin who had Rahul Roy bumped off to usurp the property and his wife Sheeba.
In Shola aur Shabnam, he was Bali (oh, don’t ask) – Gulshan Grover’s son who was outdanced by Govinda to the tune of Aaaaoooooaaaa Ooooooo but not before some nifty moves with Divya Bharti.
In Deewana, he was Amrish Puri’s son posing clear and present danger to Rishi Kapoor and Divya Bharti (again).
See adjoining picture from Bol Radha Bol, yet another major hit! 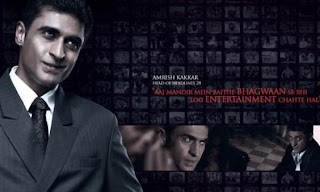 He carried this villainy right through the 2000s. His durability is best demonstrated by his roles from Kaho Na Pyar Hain (Inspector Kadam) to Rann (Amrish Kakkar, the slimy boss of a news channel).
Like all dutiful semi-villains, he did things without logic (why would one lust after Sheeba?), without fear (why would anybody dance against Govinda?) and without hope of reward (why would one fight against Amitabh Bachchan or Hrithik Roshan?).

The other abiding character he has played in his career is the role of the sensitive soul – usually brother. This has gone from positive (most notably in Rajshree Films) to negative (when he played Sanjay Dutt’s wimpy brother in Vaastav, who disapproved his brother’s actions but depended on him to punish eve-teasers of his wife). 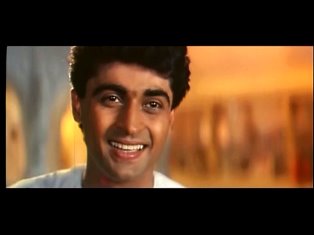 In two films directed by Sooraj Barjatya, Mohnish was the archetypal Ram – playing the dutiful elder brother to stars like Salman and Saif Ali Khan.
In Hum Aapke Hain Koun, he had a mini romantic track with Renuka ‘Colgate’ Shahane and then magnanimously refused to marry Madhuri Dixit in favour of his younger brother.
In Hum Saath Saath Hain, he was literally Ram. For some strange reason, he was asked to play pocket billiard throughout the film, ostensibly due to a disfigured hand. He got to romance Tabu this time and did so with a mixture of solemn pronouncements and gleaming white teeth.

Apart from these two tracks, I remember him in two more films.
In Kyunki Main Jhooth Nahin Bolta, he was an honest investigative TV reporter who went about doing sting operations and then hiding the incriminating videotapes in a bumbling lawyer’s shopping bag. Needless to say, he was killed for his troubles.
In Astitva, he was Tabu’s handsome music teacher whose mean moves on the vocal and carnal scales reduced the student to putty and an affair ensued. The resulting pregnancy and eventual child led to a passionate debate on a woman’s right to have children outside wedlock.

So, that’s Mr Behl for you. He’s coming again – soon – to a cinema screen near you in Khap.
Do read my other post on the other doyen of character roles - Tej Sapru.
Cinema

the mad momma said…
:) The thing to do is disable notifications. Zimble.

PS: Some may say? Find me ONE woman who thinks Salman is better looking. Even today, MB makes a better looking 'older' man while Salman furiously gets hair plugs.

Abhishek Mukherjee said…
You. Are. Back. At. Your. Best.

This is the stuff that has made Calcutta Chromosome my favourite blog over time.

Three films deserve a mention, though: Duplicate and Dulhe Raja, which demonstrated Mohnish's abilities as a comic villain; and Ek Rishta; where he actually matched AB, Akshay and Juhi quite well.
Sun Aug 07, 11:45:00 pm GMT+5:30

Non-Bengali readers should please excuse this nostalgic outpourings of a bunch of non-resident Bengalis about their favourite fictional thriller writer and his favourite poet!  Normal programming will resume soon.   Enthused by the tremendous response to my yesterday's post, I dug out my Feluda novels and quickly transliterated the Complete Recorded Works (or as much as I can remember!) of Baikuntha Mallick of Athenium Institution.  His biggest fan, Lalmohan Ganguly, recites his works at every conceivable occasion and location and even argues any attempts to find faults with Mr Mallick's works. Given the wide range of situations he has poems for, Mr Mallick's prolificity cannot be debated though the same cannot be said for his poetic talent.   Lalmohanbabu, despite his low-brow literary output, is not only a 'connoisseur' of poetry but the subject of poetry himself!  Feluda himself has composed a couple of poems - one a riddle couplet and the other a limerick in