Little Stories of the Little Road 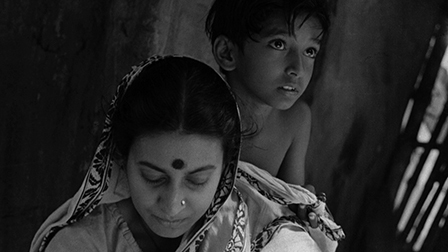 Sixty years back, a film called Pather Panchali released and continues to light up our lives with its lyrical beauty. The making of the film and its path to immortality were not easy. It only happened due to the iron will (not to mention, genius) of the film's maker.
Picking five stories from the hundreds that I have heard/read, I converted them into the only genre of fiction I can manage - 55 word stories.

If you can't make sense of the stories, do read this book.
And then, watch the film again.


“You haven’t spoken since last night.”
“…”
“Thinking about the films?”
“…”
“Say something.”
“I have decided, Monku.”
“Decided? What?”
“As soon as I go back to India, I’ll shoot a film. It’s possible. I saw it last night. Amateur actors. Real locations. Weekend shooting. I now know how.”
“But do you have a story?”

“You’ve come after seeing the advertisement for the child actor?”
“Yes, sir.”
“How old is your son?”
“She’s… I mean, he’s eight… just as you had advertised.”
“Hmm… why so much powder on his neck?”
The child spoke up. “We have come directly from the saloon. Baba just got my hair cut like a boy!”

“What do you think, Mathur?”
“Sir, we should include some message on community development… or family planning…”
“Family planning? Harihar has only two children, no?”
“Yes sir but the family leaving the village…”
“It is a classic of Bengali literature, Mathur. The ending cannot be changed.”
“So we must fund the film, Sir?”
“Yes, Mathur.”
“Sir, that Sukumar Ray’s son’s film…”
“Yes. What about it?”
“Sir, where will the budget come from?”
“Only 1.5 lakhs…”
“Sir, the financial year has ended. Budgets have reverted.”
“None of the departments…”
“Sir, only the Roads department has surplus… but how…”
“Roads? Hmmm… what did he say the English title of the film was?”

“Not a single jury member attended this show.”
“It’s past midnight, Mr Anderson, the jury members have…”
“But this film DESERVES…”
“The members have seen four films today…”
“They have not seen anything if they haven’t seen this film. You must organize another showing for the jury. I insist.”
“I’ll see what I can do.”