After five years, I am starting a new year without a book to be written.
To gainfully (?) employ my late nights, I am starting the 100 Movie Pact (inspired by my wife’s Saree Pact in 2015) with which I also hope to revive my comatose blog.

In some of my best movie-watching years, I have crossed the 200 count and thought nothing of it. However, in the present scheme of things, hundred seems to be a fairly steep target and I will have to judiciously add Pixar/Marvel to the mix in order to get to the number.

Also, I have listed down some criteria to make the #100MoviePact a little more than turning up at the nearest multiplex twice a week. 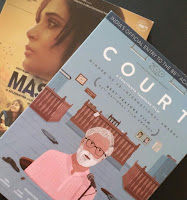 I have kicked off the project by ordering DVDs of Court, Masaan and the Criterion edition of the restored Apu Trilogy. Goes perfectly with my plan of bringing in non-Hindi, non-mainstream films into the mix.

(Leave a comment on the post if you are planning to take this up as well. Would be good to exchange notes, share thoughts and talk movies!)

palsworld said…
Great pact! Will look forward to your reviews (one of the reasons I was hooked to your blog :))

Please watch Marathi movies - they are making great ones these days & most of them are with sub-titles.

Is this confined to new released movies only, or they can date back only six months or so?
Or there is no limit?