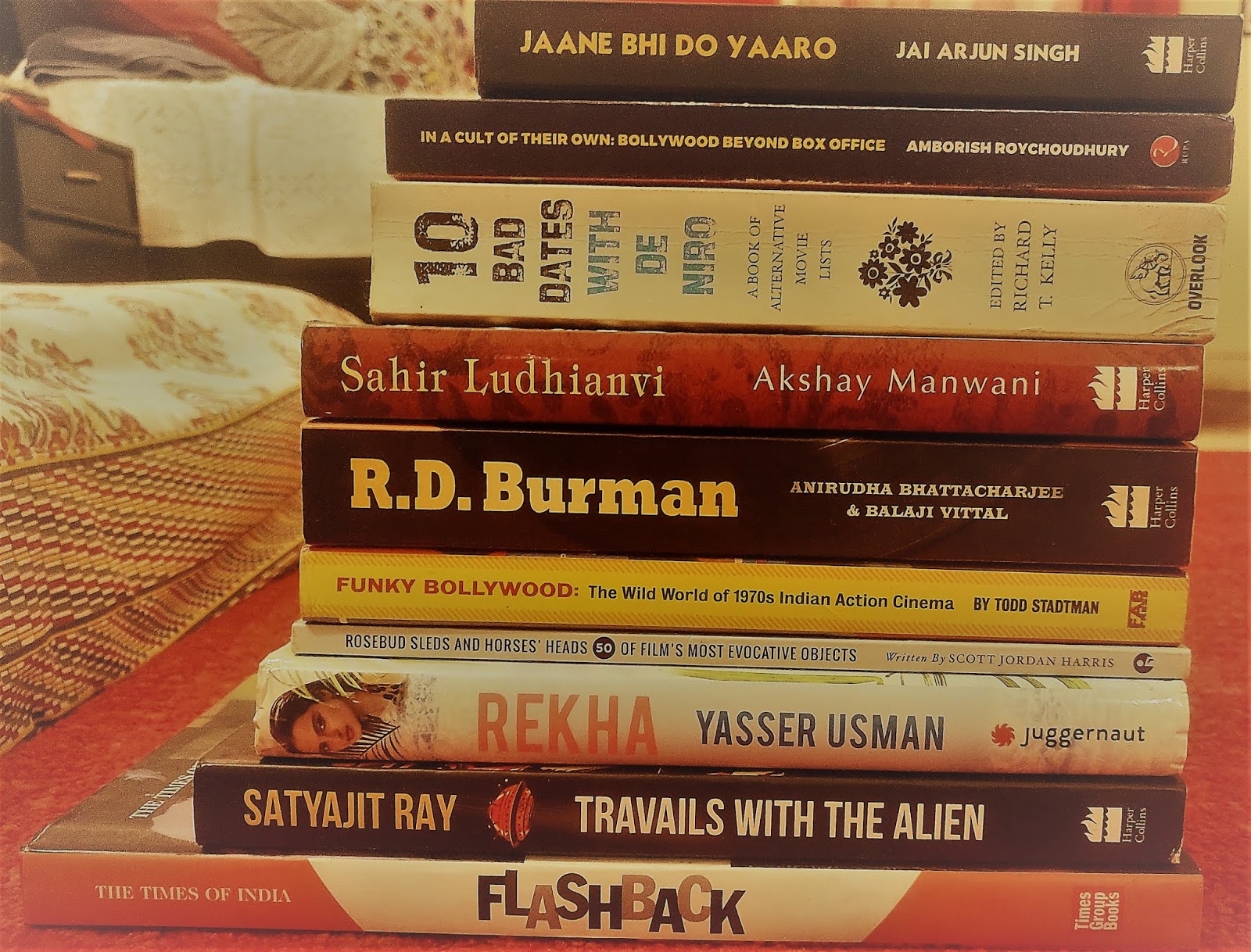 This post is in two parts… the first section is for books on cinema while the next is for everything else, the segregation necessitated by my reading habits and not the popularity of books on cinema (sigh).

CINEMA
Cinema is the only genre that I read assiduously through the decade. I didn’t lose interest and more and more good/great books came out as the years went by. Like the earlier films list, this decadal list of books doesn’t match exactly with my annual favourites. Several books that I loved after finishing them didn’t give me reasons to go back to, while others became dogeared.

Honourable Mentions
And my ten favourites, in reverse chronological order are…

Yeh Un Dinon Ki Baat Hai – Yasir Abbasi: An amazing collection of articles from Urdu magazines, featuring a mind-boggling array of stars who write about themselves and contemporaries. That these articles could be sourced (many from now-discontinued magazines) and be translated so felicitously is a miracle.

Travails with the Alien – Satyajit Ray: Probably the only full-length book on a film that was never made (i.e. The Alien, a film Ray was supposed to make with Hollywood collaboration). It is a treasure trove of previously unpublished articles, letters, photographs, news clippings along with Ray’s screenplay, reminisces and short stories (on which the script was based). The design needs a special mention because it is very rarely that you see such a diverse set of visuals accompanying an even wider range of text, fitting in with each other so beautifully.

In a Cult of their Own – Amborish Roychoudhury: An analysis of forty ‘cult’ Hindi films, this is the kind of book that you want to read fast because it is so interesting and want to read slow because you don't want it to finish. It has now won a special mention at the National Awards for Best Book on Cinema. So, it’s not only me telling you to read it!

Rekha: The Untold Story – Yasser Usman: The biggest achievement of this book was to bring alive the effort behind Rekha’s rise to stardom, a phenomenon usually associated with her liaisons and not her talent. For the 70s (and 80s) film fan, it is a deeply satisfying read as the book strikes the right balance between what we knew, what we didn’t and what we imagined. “But Amitabh Bachchan never officially commented on this.”

Funky Bollywood – Todd Stadtman: An amazingly compilation of the curiosities that made 70s Hindi cinema so much fun. Loaded with posters, screenshots and associated visual delights, the book brings alive the memories of long-lost brothers, reincarnation, grand lairs of villains and other such joys!

Flashback – Avijit Ghosh, Srijana Mitra Das, Sharmistha Gooptu: Times of India’s voluminous archives were mined to create a collector’s edition of filmi news, held together by some insightful articles by the editors on the tricks and trends of the film industry. It is the perfect flipbook of our fondest memories.

Rosebud Sleds and Horses’ Heads – Scott Jordan Harris: A wonderful inventory of world cinema's 50 most evocative objects that leaves us with that dilemma – of wanting to add your own objects but unable to drop any object from the list. Kane’s childhood sled and Khartoum's severed head are mentioned in the title but the other 48 are just as impactful. To paraphrase a line from a classic (and this book), this is "stuff movie dreams are made of".

Jaane Bhi Do Yaaron – Jai Arjun Singh: JBDY’s cult status deserved this book, one that captured both the method and madness meticulously well. Pieced together from memories of the makers and the actors, this book is the script Netflix will option when they make a film on the making of JBDY.

10 Bad Dates with De Niro – Richard T Kelly: The concept is just unbelievably perfect. A compilation of eclectic lists on cool cigarette scenes, unusual murder weapons, severed heads, sex scenes, drunk scenes and what not from world cinema. By the way, the list in the title refers to the 10 films in which Mr De Niro acted boorishly – even violently – with his on-screen women.

RD Burman: The Man, The Music – Anirudha Bhattacharjee & Balaji Vittal: This is the benchmark of cinematic biographies, where even the first-person accounts were verified by the authors to bring unmatched authenticity. The RD fanboy, the music aficionado and the film scholar will all find their fixes in this rocking book about India’s original rockstar.

OTHERS
This is a mix of fiction and non-fiction, Bengali and English, crazy and predictable.


And my ten favourites, in (approx.) reverse chronological order are…

Fire in the Babylon – Simon Lister: An unputdownable history of how West Indies went from being a bunch of extraordinarily talented cricketers to the world's greatest cricket team and in the process, becoming a symbol of excellence for people of colour everywhere. Research and storytelling come together beautifully in this saga of cricket, a book for the ages. (I met Vivian Richards at an event. I got him to autograph my copy of this book!)

The Thrilling Adventures of Lovelace and Babbage – Sydney Padua: The story of two pioneers in the history of computers is recounted with wit, verve and a whole lot of footnotes. Ada Lovelace and Charles Babbage are credited with laying down the principles behind software and hardware (respectively) of the future computers and Sydney Padua does a stellar job of bringing these eccentrics to life. Alice in Wonderland, the financial crisis of the 1840s, Queen Victoria, Lord Wellington, Thomas Carlyle et al make the quirkiest guest appearances to build a story like no other. (Did I mention this is a graphic novel?)

Bongpen 75 – Tanmay Mukherjee (Bengali): This is the best collection of short stories to have come out in Bengali language. No author – living or dead – has managed such variety and consistency in one volume.

Fortunately, the Milk – Neil Gaiman: The best children’s books don’t treat children like children. Time travel, prehistoric life, bloodthirsty pirates, forgetful parents and precocious children make appearances in this fantastic tale that I started reading to my son during his bedtimes and ended up looking forward to it as much as – if not more than – he did.

Hatching Twitter – Nick Bilton: This documentary recreates the heady days of Twitter’s founding like a thrilling novel, without changing the facts. The four founders were described in such detail that you could find one you were very similar to. And then you’d realise that you’re rooting for another. At some point, this Business book became a Self-Improvement one.

First Person – Rituparno Ghosh (Bengali): This two-volume compilation of Rituparno Ghosh's weekly columns satisfies the low-brow voyeur and the serious film fan. Rituparno talks about his attending the Abhishek-Aishwarya wedding as well as the Cannes Film Festival with the same childlike enthusiasm that we saw in his talk shows. He talks about the difficulties of being gay in India and recounts silly anecdotes from his shooting, both casually and without any intellectual pretensions. He manages to convey a sense of wonder when he narrates his encounters with stars and displays a starry stubbornness as he holds on to some of his idiosyncrasies. The only disheartening thing is that there will never be a sequel.

The Mine – Arnab Ray: A mind-slashing thriller that catches you by the throat and doesn’t let go. Even after you finish it. In fact, especially after you finish it. Our day-to-day fears, paranoia, insecurities are exaggerated manifold to create a yarn that keeps coming back to you. The visceral emotions of blood relationships (a father-daughter one, for example) are twisted into a macabre tale that makes you to ask "what would I do in a situation like this?" And the horror is that the truth is not the answer you would like to hear.

Chinaman – Shehan Karunatilaka: This was touted as the Sri Lankan novel. The quest of a disoriented journalist to find out about a genius leg-spinner who dropped off from the record books could well be the cricket novel. Yes, it’s that good.

Mother Pious Lady - Santosh Desai: If I had to recommend a book to anyone who wants to understand India, this is the one I'd go with. Everyday things that pass us go under an exceptionally powerful microscope in this collection of essays and suddenly, India makes sense. Or even if it doesn't, you know why it doesn't!

Phew... that was a lot of writing on the last day of the year!

Here's wishing all of you a great year and decade ahead. May all your days be filled with good books and great memories.
Bollywood Books Rekha Sanjay Dutt Satyajit Ray Yasser Usman

Harsamanas Mandal said…
Dipta,
Nice to see your blog.
I live at Haldia, Sometimes, since 2007 I write about my home town. "Haldia Now And Then".