on December 01, 2019
Had written this piece about Feluda for The Hindu, around the time the sleuth had turned fifty (from the time the first novel was published). Reupping this on the blog at a time when an exciting web-series remake (by Srijit Mukherjee) is in the making. 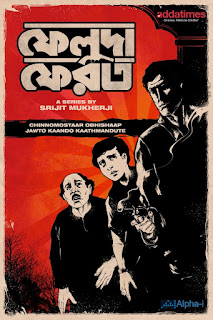 A ten-year old boy used to stick his hands into the burrows of foxes and pull out their little ones. This boy was Joykrishna Mitter, who became a teacher of Sanskrit and Maths at Dhaka Collegiate School. But he was not the typical schoolteacher. He had a built body and was good at all kinds of sports including wrestling and swimming. He died quite young, leaving behind a son of nine years. The son inherited his father’s physical strength, mental faculties and daredevilry in equal measure, growing up to become the most popular sleuth of Bengali fiction – Prodosh C Mitter a.k.a. Feluda.

Feluda ‘turned fifty’ some time back (counting from the publication of the first story published in 1965) and is now an iconic character, known outside Bengal (thanks to several translations and films made by his creator himself).
For the last five decades, he has been the archetypal Bengali superhero whose exploits finely balance the cerebral and the physical. Blessed with a photographic memory, he is ambidextrous (able to write with both hands). He represented Calcutta University in cricket, as a left arm spinner and is also a whiz at word games and puzzles. He came first in the ‘All India Rifle Competition’ though his preferred weapon is the more discreet Colt .32 (not to mention, the even more discreet grey matter). When his Colt is not available, he can match up to a Bollywood action director in Kung Fu. He has translated into Bengali two biographies of nineteenth century explorers. On the other end of the intellectual scale, he once outlined a plot for a Bollywood film (to his writer friend) that went on to become a jubilee hit. Feluda is that perfect amalgamation of traits Bengalis can’t get enough of. To paraphrase a recent Bollywood film, he has “Robi ka dimaag, Subhash ka daring”!
All these details are part of the intricately woven Feluda Canon, at least partially inspired by the Holmesian one. Feluda had a very well-defined atmosphere – fictional and yet totally real. Even his address is located on a real road in South Calcutta (though the house number doesn’t exist), which now boasts of a ‘Feluda Café’ serving coffee and nostalgia to devoted fans.

Despite being a ‘hero’, Feluda is clearly the typical Bengali bhadralok or rather, the one everyone wants to be. The Bengali pursuits of a frugal middle class life, the little joys of music and books, the sarcastic humour, the mild-mannered xenophobia (of making the most fearsome villain a Marwari!) are all there in the Feluda stories.
In fact, the Bengali penchant for travelling far and wide is legendary and Feluda exemplified this. Every major city and tourist destination in India (and a few abroad) have been the setting of crimes he has solved and Ray’s obsessive attention to detail meant that Feluda novels can easily be used as guidebooks. Train timings, distances between locations, sightseeing and eating recommendations are neatly tucked into the narrative, egging tourists on Feluda trails. Also, one can draw a near-perfect correlation between the shooting locations of Ray’s films and the settings of the Feluda novels. Kanchenjungha (1962) preceded the debut novel (1965) set in Darjeeling. The Varanasi of Aparajito became the setting for Joy Baba Felunath. Goopy Gyne Bagha Byne’s Rajasthan returned in Sonar Kella. So on and so forth.

In between the heroism and the travel and the crime solving, Feluda stands for something immensely valuable. He is a role model without being preachy. He is a professional detective but willing to forsake his fees for not-so-affluent clients. Good always wins over evil, good food is supplemented by yoga, scholarship and diligence are lauded and crass display of wealth is frowned upon. Even Feluda’s smoking of his trademark Charminar cigarettes is called out as a health hazard.
What is missing – a common grouse among at least half his readers – is the lack of female characters in his adventures. Feluda’s backstory consists only of his father. His mother received just a single line in the entire canon, blandly stating that she had died even before her husband. Continuing this trend, there are less than ten speaking women characters among all the stories and I am including a female bookstore attendant in one scene of one novel here. In an attempt to keep these children’s stories free from any potentially romantic situations, Ray had all but scrubbed out the women from them!

A great tribute to this fifty-year old legend would probably be fan fiction about his mother – a feisty student in pre-Independence Bengal – getting embroiled into a story of intrigue and mystery and meeting her future husband as they both solve a case involving – maybe – the Kohinoor and the Chittagong Armoury Raid or both. Now that would be something!
Bengali Books Feluda Satyajit Ray Soumitra Chatterjee