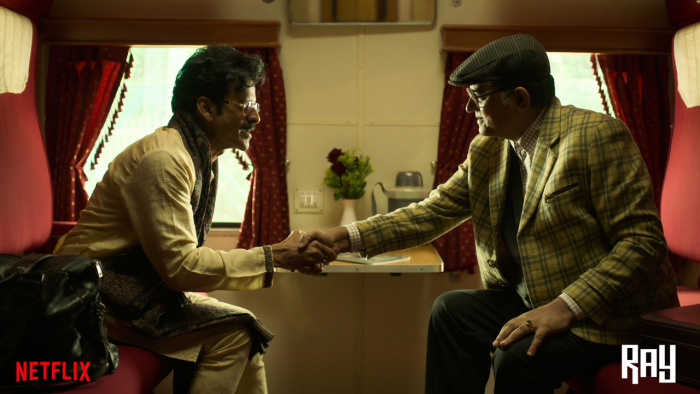 I cannot remember when I read more polarizing reviews than for Ray on Netflix right now. Srijit Mukherji is one of the superstar directors of Bengali cinema with a large and passionate following. His fans have called the anthology – and especially his episodes – a bonafide classic. While many puritan Bengalis have switched off after 10 minutes, not able to take the ‘desecration’ of their beloved icon’s stories.

In this context, one must invoke Satyajit Ray Presents, the 1980s TV series directed by Sandip Ray (with screenplay and music by Satyajit Ray). One of the challenges of filming a popular literary work – as propounded by Ray himself – is to bring a fresh perspective for those who have read it already. In both Shonar Kella and Joy Baba Felunath, he brought in new angles, removed some plot points and heightened action or suspense or both. I felt the SRP series didn’t do that. The episodes were faithful adaptations of the story and readers – all Bengalis – wouldn’t have added anything to their experiences. (If anything, they got a shock when a portly Shashi Kapoor ended up playing Feluda.) For non-Bengali audiences, it brought a new facet of the director, but the selection of the stories and the placid filming wouldn’t have blown minds. To my mind, SRP wouldn’t have been particularly memorable for most of its pan-Indian audiences. (The fallout of that is that Bengalis still get incredulous glances when we say Ray is one of the best short story writers in the world. Yes, it’s true.)

My attempt to deconstruct (not review) the anthology comes from a cross of my love for the stories in their original form and a desire to see Ray reach a much wider audience.

A new-age entrepreneur ‘who never forgets’ things is suddenly confronted with a major incident from his life that he has no recollection of. The setting is the uppermost echelon of upscale Mumbai, with the story flitting between plush apartment blocks, rooftop bars and five-star hotel poolsides. The story doesn’t spoon-feed as it moves back and forth in time, builds the narrative with snippets and screeches to a satisfying climax. (I felt the middle is a little bloated and the ending a bit abrupt.)

The original story was about a successful bachelor in Kolkata, afflicted with a similar lapse of memory. The plot hinges on the fact that the protagonist is a reclusive bachelor and has very few friends to fall back on. This theme of male loneliness is a recurring one in Ray’s stories and the adaptation veers away from it with all the impact of a speeding Mercedes. It made the story more complex, more contemporary and the ultimate payoff more eye-popping.

A makeup artist uses a windfall inheritance to build a makeup studio and dresses himself as quirky characters to go out into real spaces (instead of the stage or screen). The setting is grimy, middle-class Kolkata, which director Mukherji has a special affinity for. The noirish plot eventually moves into supernatural territory and a gruesome climax. The protagonist – again a reclusive bachelor – gets a dark, sexualized makeover and a strong revenge subplot gets added on.

The original story – intended for a family audience – was much milder in buildup and climax. It has none of the blood, gore and bodily fluids that liberally flow in the film. However, his motivation for his actions is not as clear as one would have liked them to be, creating a sense of unease as to why he would do the things he did.

One unsettling thing about this episode is how all Bengali characters speak within themselves in Bengali-accented Hindi. Them speaking in Bengali with subtitles (as shown by The Family Man recently) would have made it natural.

A singer – prone to kleptomania – ends up pilfering an objet d’art from a co-passenger in a train compartment. And then bumps into the same co-passenger a decade later. The setting is primarily a first-class train compartment from the classic era, with mehfils, hakim-khanas and pawnshops making appearances. The genteel Urdu culture is almost like a character in this episode, bringing a smile with its felicitous turns of phrases. This episode is closest to the original story and the best of the lot, thanks to the sparkling performances of Manoj Bajpayee and Gajraj Rao. Raghubir Yadav and Manoj Pahwa shine in two one-scene cameos.

The original story – featuring, yes, yet another bachelor – was about how a regular professional was branching out into music. This episode converts the story’s passing mentions of music into a narrative style, which frames the kleptomaniac’s journey. His co-passenger (a pugilist in the story) gets a wrestling subplot that Rao sinks his teeth into and creates a hilariously tense atmosphere. Another stray element in the story – ‘raw tea’ – gets an exotic makeover with a Chai Noorani Basra and that gives a very strong peg for the story to develop.

A superstar reaches a shooting location amidst the adulation he is accustomed to, only to be sidelined by a godwoman. While the physical setting is an exotic uber-luxurious hotel, the episode inhabits the familiar mental planes of Bollywood and religion.

If this episode was placed outside the anthology, I wouldn’t even have been able to identify it as a Ray story. The original story was about a star reaching a small holiday town and getting upstaged by a centenarian, the ‘world’s oldest living human’. The story had a wonderful twist in the end (discovered in classic Bengali intellectual style) and some droll observations about attaining stardom in popular culture. This episode deviates almost completely from the original story and falls flat, retaining none of the humour (or the twist). And it doesn’t add anything on the commercialization of religion either.

All the directors doff their hats at the master storyteller with Easter eggs.

In the first film, the protagonist shares his apartment block with Victor Perumal, Birendra Karandikar, Arjun Mehrotra, Manomohan Mitra, Arindam Mukherjee and Maganlal Meghraj (among others).

In the second, Ami chini go chini plays in the background when a stage actress rejects a suitor.

In the third, a pawn shop proudly displays Satyajit Ray’s short stories (in a trademark red-bound notebook) among its treasures.

The fourth one is packed with them, though in a ham-handed manner. The star wears a Gupi Gayin Bagha Bayin t-shirt, someone else wears a Song of the Little Road t-shirt, the star shoots for Chiriyaghar and the hotel manager is called Pritish [which] rhymes with British. (I am ignoring a cringe-inducing speech with his film titles thrown in.)

All the episodes have made radical departures from the original text. A friend mentioned that they have “sexified Ray”, which is true – both in the positive and negative sense.

For a bunch of children’s stories written in the 1970s and 1980s to be transported to the 2020s, a makeover becomes essential. That a couple of the stories have an abundance of cusswords and graphic sexuality take them further away from the original, certainly the reason behind at least some of the angst (among Bengalis). Satyajit Ray faced this himself when he adapted Tagore’s stories for the screen and was hauled over coals by the cultural denizens of his time.

A review of any adaptation often becomes a lament for what could have been instead of an objective evaluation of what it actually is. To restrict myself to what Ray is, the episodes are intriguing and quirky, but also uneven in quality. As a Ray fanboy, I felt the best episode is the most faithful adaptation while the worst deviates the most, losing its moorings in the process. Maybe there is a lesson for future adaptations here?

The success of Ray doesn’t lie in the hands of the Ray fanboys, though. The success would come if an Aligarh teenager smiles a bit when he recognizes his uncle's affliction in one story, if a Bangalore tech millionaire feels a frisson of fear that he might also lose his mind someday, if a Czech filmmaker reaches out to the Ray family enquiring about the rights to his stories. And of course, if Penguin’s Ray Library sees an uptick in sales after this.

As for Ray fanboys, we will have to ask ourselves if we have the courage to let our stories go?